The company owner, Carlos L. Arce, served as an airborne Ranger with an infantry unit of the First Cavalry Division in the Vietnam War.  He was in country during 1969-1970 operating as a squad leader of a Recon unit and participated in the invasion of Cambodia in the summer of 1970.  He also served as NCO in Charge of an intelligence and psychological opearations unit.

During the war he was wounded in combat, suffered a series of accidental injuries and underwent a long period of hospitalization for Malaria.  After the war, the residue effect of wartime injuries and severe exposure to the chemical defoliant Agent Orance and others, have taken their toll; he has struggled with severe spinal stenosis, C.O.P.D., P.T.S.D., and cancer.  He is now classified as 100% disabled by the Veterans Administration.

Nevertheless, he is charging ahead with the development of the company, creating jobs and hiring veterans.  He belongs to several veteran groups including The American Legion, The Veterans of Foreign Wars, Disabled American Veterans, Vietnam Veterans of America, The Veterans Coalition of Coral Springs, Florida, The Elite Service Disabled Veteran Owned Business Network, The National Veterans Small Business Coalition…  He is also a national advocate for veteran owned small businesses.

“For those who fight for it, freedom has a flavor the protected will never know.”

Writing has always been a favorite pastime of this veteran and trying to understand what happened in Vietnam a major preoccupation.  He has written a seven-book series novel about every aspect of that painful war, which is available for digital download in Amazon.com

This comprehensive look at America’s most painful and shameful war aims to contribute to the historical understanding of how our nation was drawn into a senseless conflict, how our best planners were outwitted, how we were driven to inflict the greatest environmental destruction ever, how we failed to win in time and how we ultimately ran and abandoned our allies.  The seven-volume novel is illustrated with 685 pictures and drawings interspersed throughout the text to clarify and enhance understanding.  It follows an infantry soldier through a year tour of duty and his struggle to avoid personal destruction.  Each of the 41 chapters in the series is a complete episode with beginning, middle and end.  The Vietnam War was America’s last stand in an international “Cold War” and our nation did its best to preserve and defend freedom, but lot.  In the end, the costly Cold War against Communism was won economically and freedom in the world survived.  Vietnam, a war we should have never started nor lost. 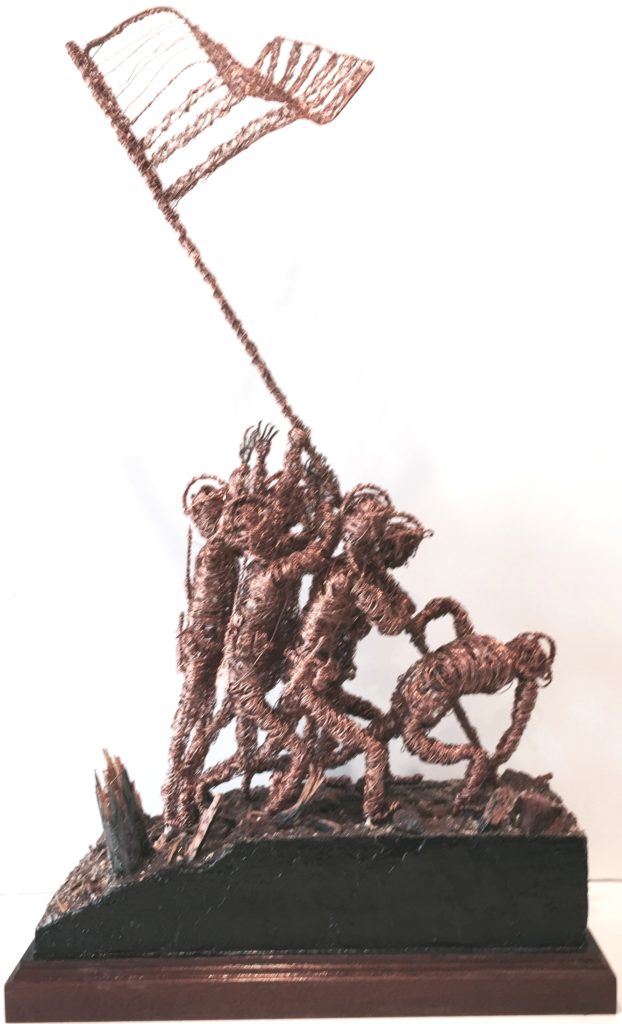 Half a mile of copper wire hand woven into a realistic three-foot statue.  A tribute to the fallen.

Replace this widget content by going to Appearance / Widgets and dragging widgets into this widget area.

To remove or choose the number of footer widgets, go to Appearance / Customize / Layout / Footer Widgets.

Scroll back to top